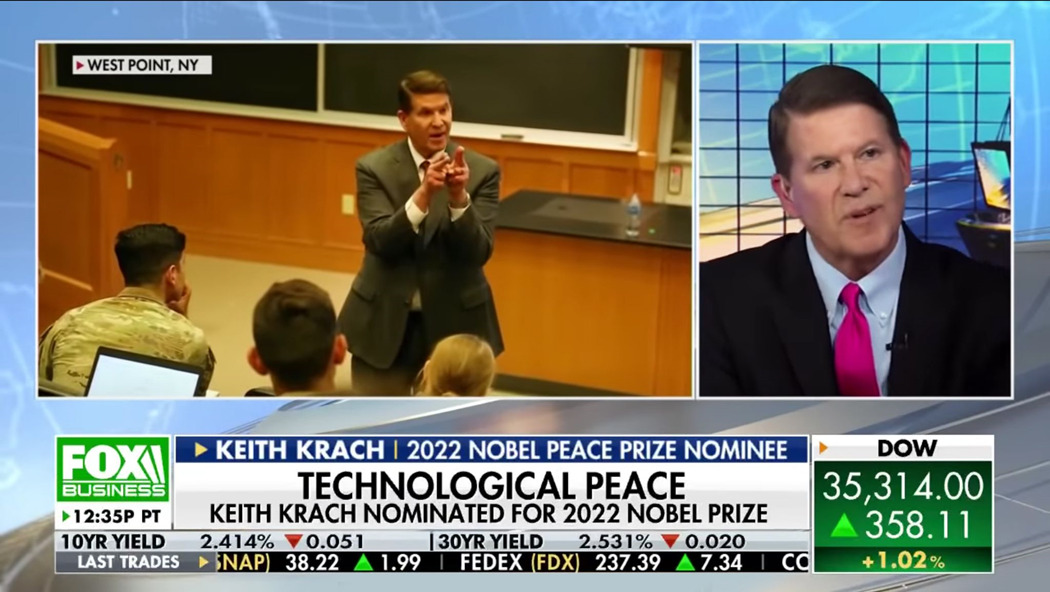 WEST LAFAYETTE, IN, and WASHINGTON, DC, March 30, 2022 – One year after being sanctioned by the Chinese government, former Under Secretary of State and current Chairman of the Institute for Tech Diplomacy at Purdue, Keith Krach, was nominated for the 2022 Nobel Peace Prize. Krach deployed his “Trust Principle” doctrine in building the Clean Network Alliance of Democracies to defend against technological authoritarianism, safeguard global economic security, preserve democracy in Taiwan, and protect human rights.

“Peaceful partnership, not fear mongering—that is the stark choice that Keith Krach has enabled through his years-long campaign and mission to unify the world around a common, peaceful technology accord, formally recognized today as the Clean Network alliance,” The Taipei Times article, US’ Keith Krach gets Nobel Nod, summarized. “Taiwan counts itself among the network’s ranks, creating the opportunity to recognize its sovereignty. Keith Krach’s attendant efforts regarding human rights abuses by China and Taiwan’s quest for independence are, in many ways, just different colors in the same noble cause that Mr. Krach pursues as a life purpose…The world truly is a better and safer place because of his courage and efforts.”

As Mitch Daniels, President of Purdue University, and former Governor of Indiana, observed: “A single vision is one more than most people will ever produce. Keith Krach is working on the most recent of a long string of them. And unlike so many visionaries, he never fails to make his new conceptions real, and powerfully successful. Keith’s career is a story of one giant leap after another, driven by his philosophy of “Transformation to the Power of Trust” in realm after realm—robotics, engineering, commerce, education, philanthropy, diplomacy and even the way people sign. On top of all these accomplishments, including having the rare distinction of being unanimously confirmed by the U.S. Senate, he has now been nominated for the 2022 Nobel Peace Prize. Fortunately for our university, he deployed his skills on our behalf during six years of leadership on our Board.”

An American Military News article, Keith Krach gets Nobel Peace Prize nomination for campaign against Chinese authoritarianism, explained, “Krach’s role of running U.S. economic diplomacy allowed him to showcase his economic prowess on a global scale when he developed a campaign to challenge China’s authoritarian grasp of 5G technology and computer semiconductors globally. His Trust Principle helped expose China’s widespread human rights abuses and genocide of its minority Uyghur population, as well as its aggressive posture towards Taiwan.”

During his Senate confirmation hearing, Krach was asked about his strategy for defending freedom against authoritarian aggression. He responded: “My focus will be on harnessing our three most powerful areas of competitive advantage by strengthening our partnerships with friends and allies, leveraging the innovation and resources of the private sector, and amplifying the moral high ground of our democratic trust principles to advance peace and prosperity.” This became the basis for the “Trust Principle” doctrine, which paved the way for a number of critical initiatives vital to advancing freedom and global economic security.

Likewise, a recent Forbes article, 2022 Nobel Peace Prize Nominee Keith Krach’s “Trust Principle” Is Antidote To Authoritarianism, explained: “Krach’s ‘Trust Principle’ is based on democratic values. These include respect for the rule of law, property, press, human rights, national sovereignty, labor and the environment, and standards for transparency, integrity, and reciprocity. The ‘Trust Principle’ is the new basis for 21st century international relations. It stands as a peaceful alternative and antidote to Russia’s and China’s ‘Power Principle,’ a geopolitical framework rooted in brute power, coercion, and intimidation.”

During the height of the pandemic, Krach and his team deployed the “Trust Principle” doctrine to confront the CCP’s march to dominance of the global 5G infrastructure. By building the resulting Clean Network Alliance of Democracies in less than a year—and during the worst days of the pandemic—Krach’s team created a replicable formula for overcoming authoritarian economic threats. Krach’s predecessor as Under Secretary of State in the Obama Administration, Robert Hormats, observed: “The Clean Network’s success in countering China’s 5G plan serves as a powerful, nonpartisan model for rallying our allies, leveraging the private sector, and amplifying democratic values based on trust.”

The Clean Network’s remarkable impact became the focus of a Harvard Business School case study and continues to be included in course material. A Bloomberg article said the Clean Network is to China what George Kennan’s “long telegram” was to the Soviet Union. Just as Kennan’s strategy addressed the Soviet threat to peace in the 20th century, Krach’s strategy of trusted collaboration was devised to contain China’s threat in the 21st century.

The “Trust Principle” was the basis of Krach’s efforts to strengthen economic ties between Taiwan and the U.S. and its allies to help shield the “lynchpin democracy” from China’s aggression. Krach was the highest-ranking State Department official to visit Taiwan since 1979. He was greeted by 40 Chinese fighters and bombers. Taiwan’s President Tsai Ing-wen summed up his historic trip by saying, “Under Secretary Keith Krach’s visit exemplified the remarkable possibilities of Taiwan-US relations.”

Chairman Krach’s solidarity with the oppressed Uyghur Muslims in China was another reason cited in the nomination letter to the Nobel Committee. “Under Secretary Krach was the first U.S. official to publicly label the CCP’s atrocities against my Uyghur brothers and sisters what they are—a genocide. I am grateful to Keith for his vision, leadership, and integrity,” said Nury Turkel, Vice Chair at the U.S. Commission on International Religious Freedom.

Krach utilized the “Trust Principle” to shine the light of transparency on the CCP’s atrocities. He reminded the leaders from multiple sectors—government, business, universities, pension funds, stock exchanges, financial institutions, and civil society—to act on their moral obligation and fiduciary duty to disclose and divest from Chinese companies enabling human rights abuses. He sent letters to CEOs, university governing boards, and leaders of civil society groups, alerting them to their unwitting participation in the Chinese Communist Party’s “systematic attempt to destroy Muslim Uyghurs and other ethnic minority groups in Xinjiang.” Krach’s persistent advocacy helped foster a nationwide divestment movement on college campuses.

Next Chapter: Institute for Tech Diplomacy at Purdue

“During my service on Under Secretary Krach’s team as the Science and Technology Adviser to the U.S. Secretary of State, I saw how the “Trust Principle” led to a coalition of free people, free enterprises, and free societies to counter the authoritarian aggressions, whether from Russia or China or elsewhere, in one of the most urgent and strategic struggles in modern history,” Mung Chiang, Co-founder of the Institute for Tech Diplomacy and Dean of the Purdue University College of Engineering, remarked. “Technology must advance freedom, and Keith is a relentless fighter for peace and freedom.”

“Our Board of Directors, fellows, and the entire team are inspired by Chairman Krach’s multi-faceted contributions to humanity and energized by his continued dedication to advancing freedom through trusted technology,” added Director Bonnie Glick. “Chairman Krach not only had the moral fortitude to lead the campaign to sanction Chinese technology firms enabling the genocide of Uyghurs, but also, having taken three of his tech companies public, he had the creditability to do so.”

Former Defense Secretary, CIA Director, and a member of the Institute for Tech Diplomacy Advisory Board Leon Panetta observed the urgency of adopting Krach’s “Trust Principle”-based model to counter authoritarianism: “China’s techno-economic aggression presents a serious threat to the United States and the free world, especially when it comes to advanced technologies.The Clean Network pioneered a trust-based model for countering authoritarian aggression across all areas of techno-economic competition. I support the adoption of that successful model.”

About the Institute for Tech Diplomacy at Purdue:

The nonpartisan Institute for Tech Diplomacy at Purdue University is the world’s preeminent institution focused on Tech Statecraft, a new model of diplomacy that bridges the high-tech sector with the foreign policy and national security sectors to ensure trusted technology is used to advance freedom.​ The Institute for Tech Diplomacy leverages Purdue’s strength in innovation, deep expertise in technology, and global prowess in educating transformational leaders. It focuses on rallying our allies, leveraging the innovation of the private sector, and amplifying democratic values based on trust.