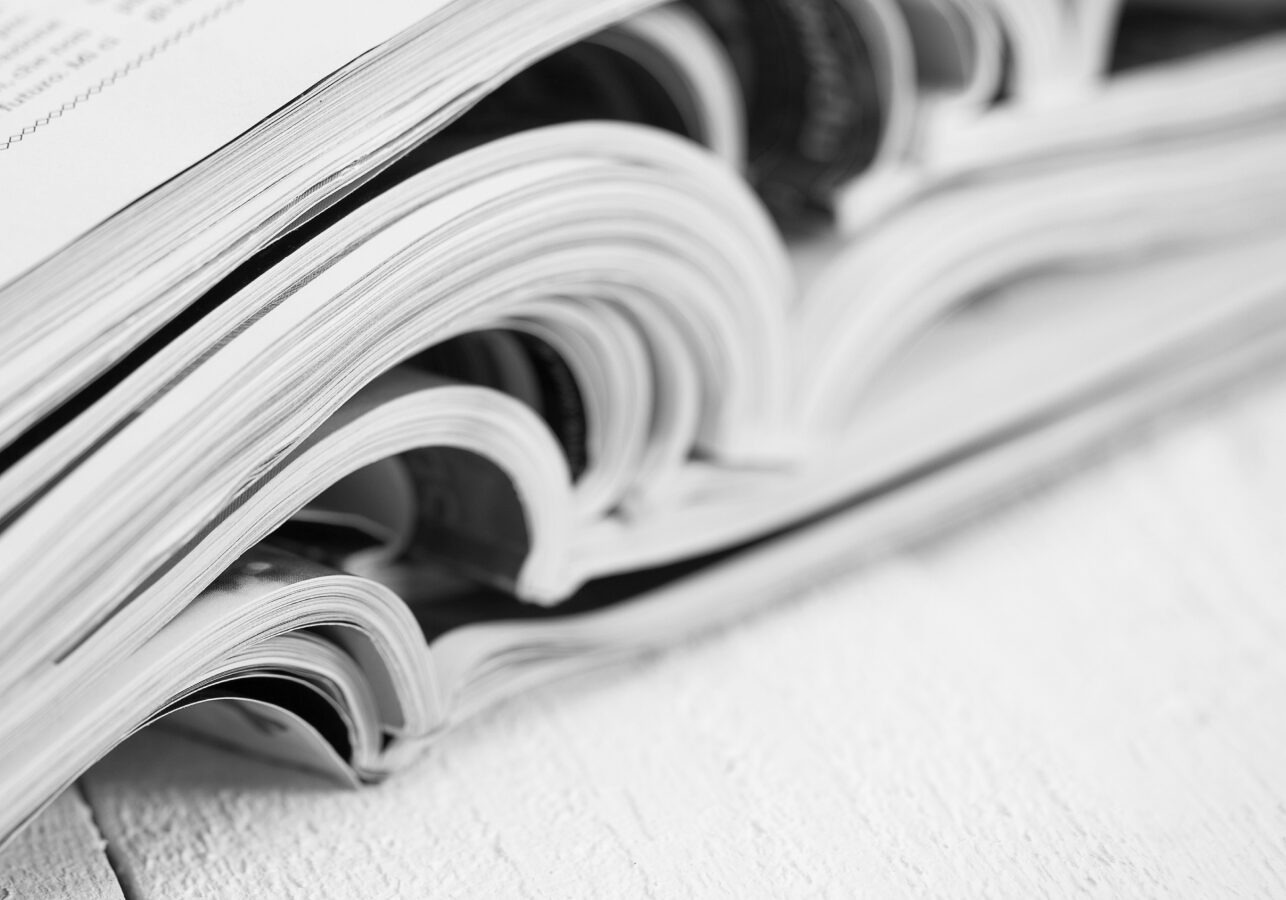 The Clean Network team’s strategy for reversing Huawei’s market momentum included vigorous press outreach to build awareness of Clean Network’s dramatic growth. The following are just a few examples that demonstrate the effectiveness of this strategy.

U.S. Policy on China May Move From ‘America First’ to America & Co.

Silicon Valley veteran Keith Krach is harnessing the power of Metcalfe’s Law to build a network of nations to counter China – a notable change in tone after years in which the administration pursued a go-it-alone, “America First” strategy.

Under Secretary of State Krach coined the term Clean Network and leads the initiative, which keeps telecom gear made by Huawei out of networks in democratic nations. Krach describes the Huawei effort as a “beachhead” in a wider battle to unite against Chinese economic pressure in everything from investment to strategic materials. 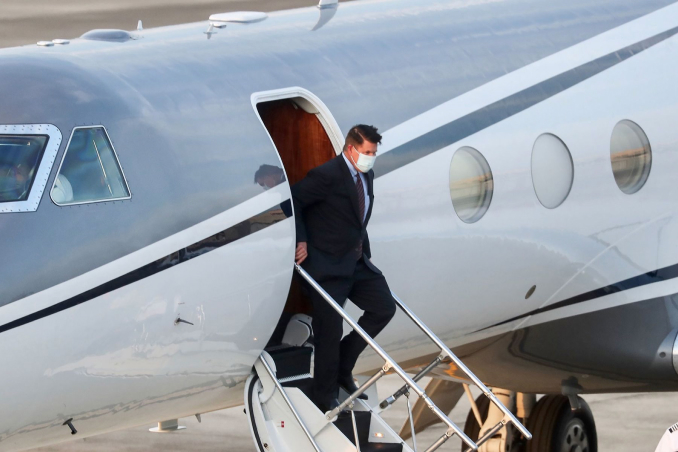 Clean Network Alliance of Democracies Turned the Tide on Huawei

Brazil became the 50th Clean Network member. In just six months, the Clean Network has grown to over 50 Clean Countries, representing 2/3 of the world’s GDP – 180 Clean Telcos and many leading Clean Companies.

Earlier in the year, Huawei’s president boasted, “We have 91 commercial 5G contracts worldwide, including 47 from Europe.” It looked like Huawei was going to run the table and dominate the globe. Remarkably, Huawei’s vaunted 90 deals have dwindled to a mere dozen outside of China. By building an alliance of democracies, the Clean Network has garnered overwhelming international support and bipartisan backing.

Further, the Clean Network has demonstrated a rare genius for building effective public/private sector partnerships that leverage the innovation and resources of world’s business leaders and entrepreneurs. 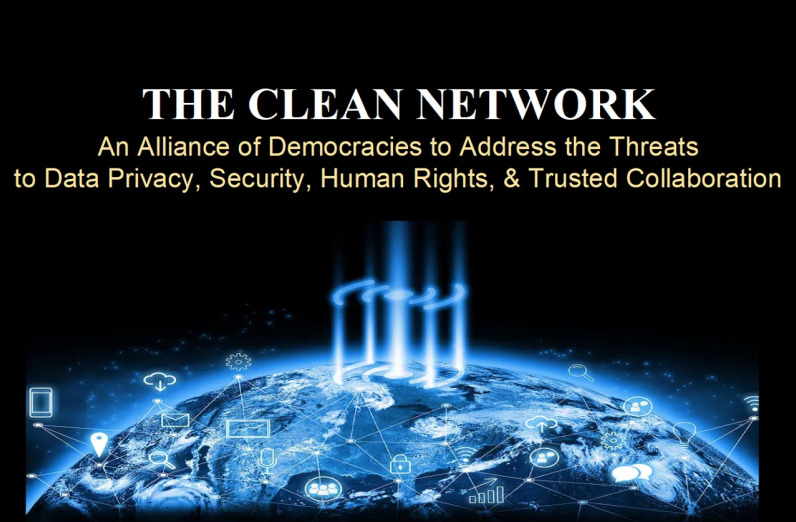 Krach and his “E-Team,” through dedicated, creative, non-partisan outreach, have laid the foundation and future plans for a Network that needs to be expanded.”

WASHINGTON – The administration scored a victory against the regime in Beijing this year through its “Clean Network” campaign that booted Huawei Technologies Co. out of critical telecommunications infrastructure in many countries. The effort, while not well-published, secured an array of commitments from governments to exclude untrusted vendors from their fifth-generation (5G) wireless networks. As of this month, more than 50 nations, representing over two-thirds of the world’s economy, and 180 telecom companies had joined the “Clean Network” initiative led by the U.S. government.
A former businessman and Silicon Valley veteran, Krach coined the term Clean Network and led the initiative to take away Huawei’s momentum by unifying allies. And within a few months, the network garnered overwhelming international support. Today, the vast majority of EU, Nato, and OECD members embrace the Clean Network program. “The Clean Network’s momentum turned the tide on Huawei and the CCP’s 5G master plan,” Krach told The Epoch Times. “It proved that China Inc. is beatable. And in the process, we exposed their biggest weakness—its lack of trust.” 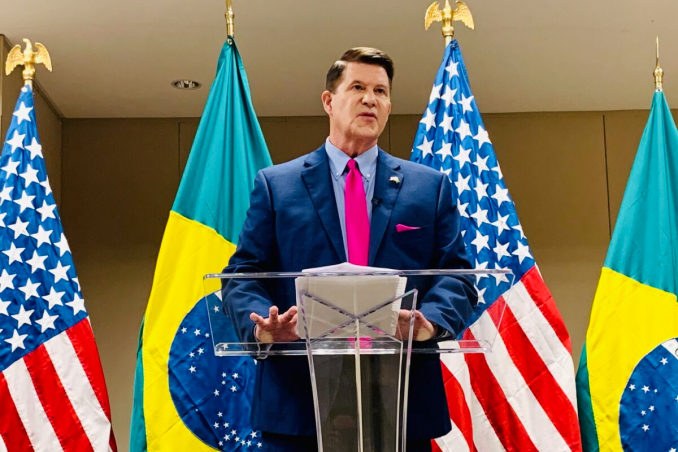 US Undersecretary Krach speaks at a meeting on Clean Network in Brazil on Nov 11, 2020

The growing coalition is a “security blanket” for countries and telecom operators to ground against Beijing’s retaliation. Krach defines the 5G effort as a “beachhead” in a wider economic battle against the CCP. He believes the alliance of democracies is the “golden key”, as it lays the groundwork for many other areas such as clean currency, clean data, and clean Internet of Things.

A billionaire U.S. tech mogul who first climbed the ivory towers of Detroit and Silicon Valley before landing one of the most elite posts in Washington recently spoke about the historic efforts his team took to curb the rise of one of the Chinese Communist Party’s (CCP) greatest threats, Huawei.

Under Secretary of State Keith Krach focused on the need for the United States and the free world to waylay Huawei and the CCP’s bid to dominate the world’s 5G technology in an exclusive interview. Krach encapsulated the importance of the efforts in one simple sentence: “Failure is not an option.”

Krach made several brilliant tactical maneuvers that stunned the Chinese Communist Party’s Huawei and their 5G global conquest ambitions, leaving them dead in the water.

“The laws of the jungle have changed,” said Krach, referring to a modern world more reliant than ever on high-speed wireless computing 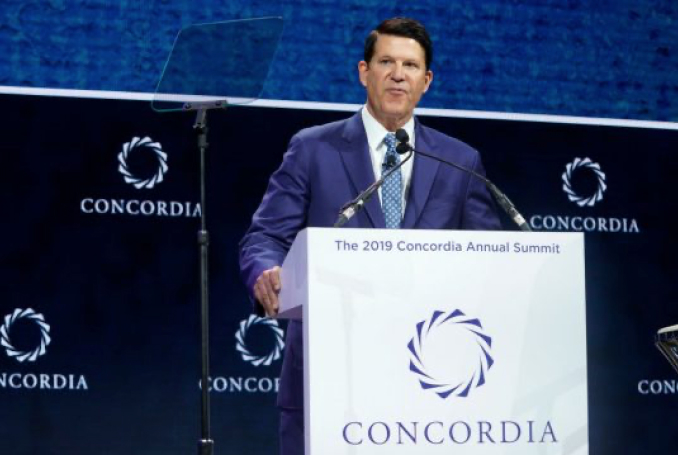 Silicon Valley entrepreneur turned Diplomat dared to prove that “China Inc.,“ a term referring to the Communist Party’s state-run capitalist ambitions, is beatable if governments and corporations have the guts to expose its Achilles heel – mistrust.

“Speed now is the number one currency in business today and you need that momentum for that digital transformation…And the big, they no longer eat the small. The quick eat the slow.

Huawei’s Decline Shows Why China Will Struggle to Dominate

The telecom giant was set to control global 5G, but now it’s goal is survival.

One of the biggest geopolitical developments of the last two years has been the quiet decline of Huawei Technologies Co. In 2019, the Chinese behemoth was racing toward dominance of the world’s 5G
networks. It was a symbol of Beijing’s apparent rise to technological primacy. Today, however, Huawei isn’t thinking about supremacy: “Our aim is to survive,” its chairman has announced.

The U.S.-sponsored Clean Network, a coalition of countries that pledged to exclude high-risk vendors, gathered more adherents during 2020 as American officials consistently drove home the dangers of working with Huawei. It also made it under Biden has easier to rally international support. For years, Huawei has been tightly linked to the CCP. Now, it is becoming a casualty of America’s intensifying technological conflict with Beijing. 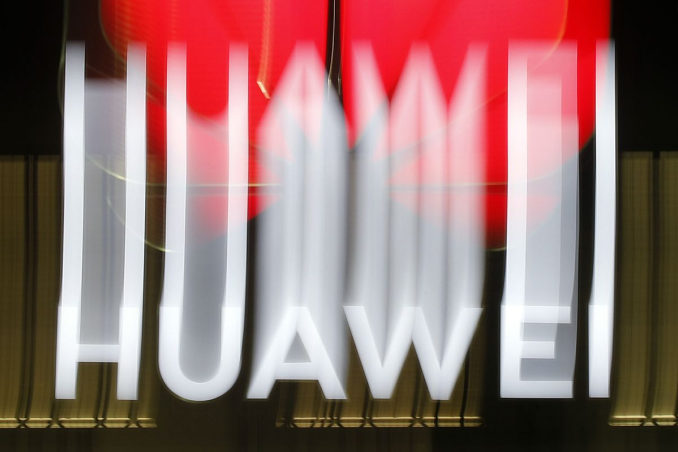 U.S. Set Out to Hobble China’s Huawei, and So It Has

Huawei is in a deep slump. As recently as the start of last year, the world’s largest maker of telecommunications equipment was increasing market share in 5G rollouts. Now, its revenue has dropped for three straight quarters. Its global telecom market share is shrinking as it loses out in key markets, a result of U.S. pressure designed to halt the spread of Huawei’s 5G technology. Rarely, if ever, has the U.S. directory taken on such a big overseas company and had such an impact. 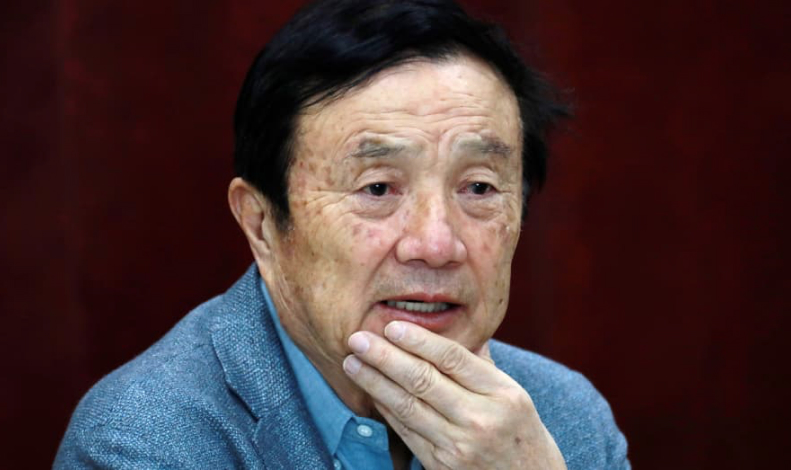 Huawei founder and CEO Ren Zhengfei spoke at a press briefing in Taiyuan in Shanxi province in February.

The drop marks the third straight decline in quarterly revenue for Huawei, the world’s largest maker of telecom equipment and formerly one of the world’s biggest smartphone sellers, and the declines have accelerated since the end of 2020.

The decline marked a sharp acceleration from the 16.5% revenue drop in the first quarter and an 11.2% drop in the fourth quarter of 2020. Eric Xu, deputy chairman, acknowledged the impact of Washington. “We’ve set our strategic goals for the next five years,” Mr. Xu said. “Our aim is to survive and to do so sustainably.” 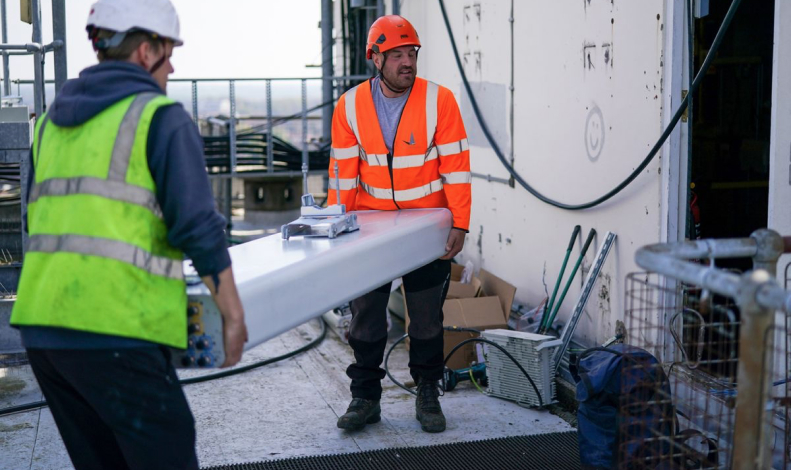 Men lifted a Nokia antenna during work to replace Huawei on a mobile network in U.K. 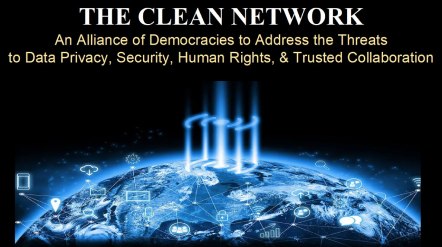 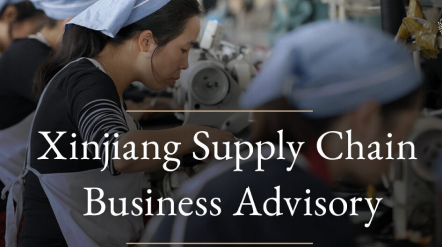 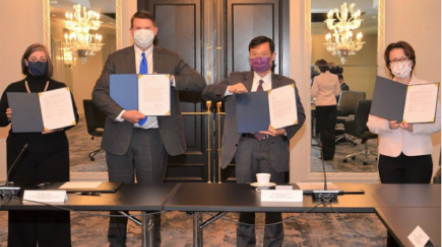 Before the list came out, Fox Business’s Liz Claman asked Krach if he was worried about being sanctioned. He responded: “That’s a badge I wear with honor. I am going to act and not react. I don’t think we should bend a knee to the China bully. When you confront a bully they back down and they really , really back down when you have your friends by your side. That’s why we formed the Clean Network of Democracies and it has been such a success.”

The Catalyst for Stronger US-Taiwan Ties

On September 17th, 2020, U.S. Under Secretary of State Keith Krach landed at the Shung Shan Air Force Base in Taipei to become the highest-ranking State Department official to visit the island since the U.S. established diplomatic relations with Beijing in 1979. Wearing a face mask and giving his clasped hands signature salutation, Krach descended from a Gulfstream G-V jet to bump elbows with a greeting party of senior Taiwanese officials.

He was there to attend a memorial service for former President Lee Teng-hui, who led the island’s transition to democracy and died at age 97. It is hard to overstate President Lee’s importance, who is considered to be the father of Taiwanese democracy and viewed by many as Taiwan’s George Washington. During his three-day visit, Krach would meet with high-tech business leaders and top government officials, hold discussions on creating a new economic dialogue, and attend a banquet in his honor hosted by Taiwanese President Tsai Ing-wen and Taiwan Semiconductor Manufacturing Company (TSMC) founder Morris Chang. 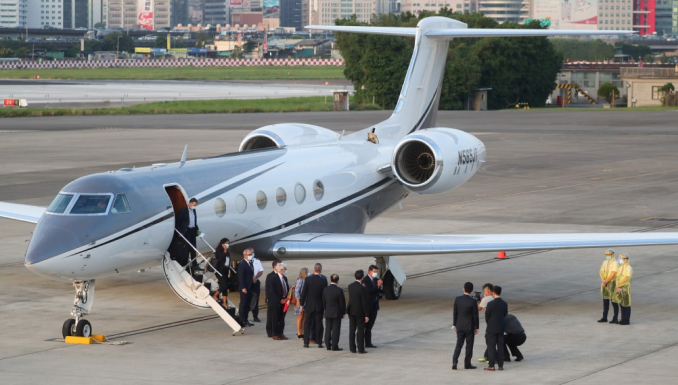 Krach’s historic arrival in Taiwan as the highest -ranking State Department official since 1979.